What’s the first thing that comes to mind when you think of a BAF anchor? For us all at Resistance Finland, the answer is obvious: grilling. We have a long running history of grilling at anchors, and that’s not going away! We’ve even had Enlightened agents joining in on the grilling at a field anchor! And as our love of grilling is a big influence on many operations, it was an especially important factor in the following operation’s plan and execution.

We started planning immediately after intel for the second Dark XM Saturday dropped. Upset by the fact we weren’t given a chance to demonstrate our starbursting skills, we decided to prevent the possibility of a frog attempt, with some nice blue blankets over Helsinki. As we couldn’t but approximate the froggies’ measurement time, we came up with the plan, codenamed “Doubles”. Two fields, both with a different set of three anchor portals. And not only did we choose anchors that were geographically far away from each other, we also waited half an hour before throwing the second field to stretch the virus immunity over one more possible measurement time.

Of our six anchors, five were manned (the last one being on an inaccessible island). And of the remaining five, every single one involved grilling. One of the locations wasn’t actually a campfire site, but that was fixed by an agent bringing their own grill right to the portal. A total of 18 agents got to enjoy guarding the portals/fires. 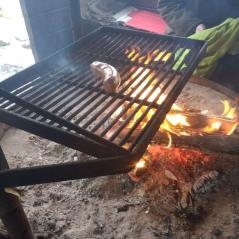 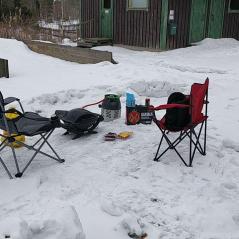 The cleaning work started a bit after 15:30, and soon the first field was up. After that, the cleanup crew had some time to move into their next locations. At 16:05 a second round of blocker clearing was executed, and the second field established. Great success! Very soon after creating the second field we heard news that the Enlightened had their measurement in Europe at 16:00, so our job was done. But the grilling was not. Indeed, it continued late into the night, with even some of the lane clearing agents joining in on the fun 🙂

Of course, our Dark XM shenanigans don’t end here. Click here for a sitrep on what happened a week afterwards, when our ribbiting friends actually did have something planned.